A new school year just started, and we are hopeful that in-person learning continues. For many parents, their children’s online educational experience during the Covid chaos may have highlighted or exacerbated ADHD symptoms in their children. What really is ADHD, and when do your child’s symptoms warrant medical and/or school intervention and support?

ADHD stands for Attention Deficit Hyperactivity Disorder. There are three different subtypes, Hyperactivity/Impulsivity, Inattention, and Mixed, which are classified by the signs/symptoms each individual presents with.

The Hyperactive and Impulsive Subtype of behaviors almost always occurs together in young children and is characterized by the inability to sit still or inhibit behavior.

The predominantly Inattentive Subtype (often labeled as ADD) is characterized by reduced ability to focus attention and reduced speed of cognitive processing and responding. Children with the inattentive subtype often are described as having a sluggish cognitive tempo and frequently appear to be daydreaming or off task.

Finally, the Mixed Subtype is exactly like it sounds—a combination of the other two. Additionally, it’s important to understand that the diagnosis may be complicated by the presence of anxiety, depression, or a conduct disorder.

While there are various types of testing and grading rubrics for the different subtypes, it’s important to note that there is a lot of grey area with the diagnosis. Different environments and activities will often lead to different presenting behavior (eg. school vs. sports vs. chores, etc). For this reason, it’s important to seek out a qualified professional for an accurate diagnosis.  What are some things you might notice in your child that may potentially be signs or symptoms of ADHD?

Inattentive Subtype often presents with difficulty maintaining attention in playtime, school, chores. You may tell your child to put the laundry away, and either they seem to not be listening to you at all, or 20 minutes later they’ve gotten distracted and never started or finished. How often does your child forget his/her lunchbox? How many times have you had to run out last minute to get school supplies for that project he/she forgot about? Do they have trouble sitting down and actually getting started on that project because they’ve procrastinated to the last minute? When he’s working on something, does he have a meltdown because it’s too hard or too overwhelming? 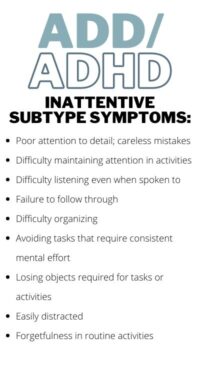 Hyperactive and Impulsive Subtype often presents as an inability to sit still, or always appearing to be “on the go.” These kids are frequently squirming in their seats, tapping their pencils, or bouncing their legs. They may have difficulty waiting their turn, or blurt out in the middle of a conversation, or get up out of their seat when they’re supposed to remain seated. A younger child may not be able to play quietly, or will inappropriately run around and climb on things, despite being told not to. Are you exhausted at the end of the day because your child won’t.stop.moving.? Yes, that could be a sign of hyperactivity. 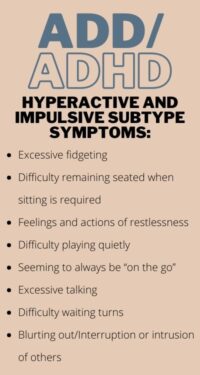 Why do I have ADD/ADHD?

There are a few different reasons why the symptoms may present, but essentially it comes down to an imbalance of one or more neurotransmitters—norepinephrine, dopamine, GABA, serotonin, or glutamate. Another possible explanation for new onset of ADHD symptoms in adolescents is frequent digital media use (eg. smartphone use, video gaming, etc). The frequent distraction and rapid feedback with these digital devices may disrupt normal development of sustained attention, impulse control, and ability to delay gratification. To compound matters, using digital media displaces time invested in other activities that would otherwise build attention span and executive function (reading, crafts, team sports, outdoor activities, etc). Unfortunately, it remains to be seen whether symptoms that develop in response to media use require or respond to typical ADHD treatments.

A personal story of ADHD

Growing up, I was the “hyper kid”—the kid who never stopped moving. I often got in trouble for getting out of my seat or talking in class. My parents put me in multiple sports to try and manage my need to always move … which helped, for the most part. Though I first started showing signs in 5th grade, my inattentive symptoms didn’t present in school until my work load became heavier, when my math problems required more steps, and I had to not just read but also analyze books. (How was I supposed to do that when my brain was thinking about the storm happening outside?!) I would often skip steps, reread the same page over and over again, or wait to write a paper late the night before it was due, all because I was overwhelmed by the idea of starting projects.

My dad shares the same diagnosis, and we had our own ADHD language. My poor mom would often be lost when he and I talked, our brains jumping from subject to subject, like a ping pong ball.

I was not officially diagnosed with ADHD until my last semester of college. As such, I had to learn to cope with my symptoms and create a system that worked for me; this involved a significant amount of learning how to organize my days and tasks needing to be completed, as well as behavioral changes. I incorporate the concepts of that system into helping others with ADHD learn to create a system for themselves.

It’s important to note that while traditionally prescription medications are the first line of treatment, that doesn’t mean it’s always the best option. Behavioral changes play a large role in learning to cope and create strategies for success. Occasionally, some supplements may also be beneficial to support proper neurotransmitter balance.