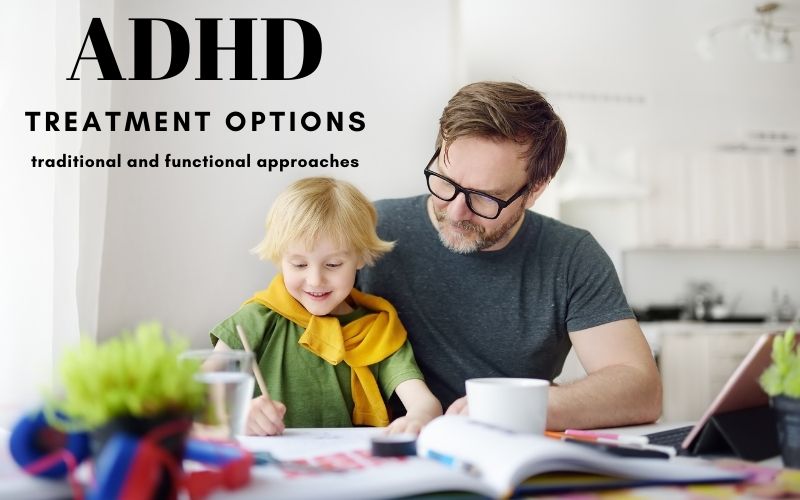 Traditional and functional medicine both treat ADHD with various methods. Stimulant medication, behavior and dietary interventions, and even supplementation can be helpful in treating ADHD. It’s important to remember that there is no one-size-fits-all when it comes to treatment; it depends on the individual and their specific case. Read on for some different options to be considered in treatment.  Not sure if it’s ADHD?  Read this article for an overview of the different types and symptoms.

In traditional Western medicine, stimulant medication is typically the first line of treatment for ADHD. Popular stimulant medications (some which may sound familiar) include Ritalin/Concerta (methylphenidate) and Adderall/Adderall XR (amphetamine salts). Treatment with medication is dependent on a number of factors, primarily: age, symptoms, comorbid (co-existing) conditions, as well as parental comfort with the use of medication. With ages 4-6, behavioral interventions are preferred over medication use.

“Integrative medicine incorporates evidence-based medicine, both conventional and complementary and alternative therapies, to deliver personalized care to the patient, emphasizing diet, nutrients, gut health, and environmental influences as a means to decrease symptoms associated with chronic disorders.” (Esparham, A 2014).

Behavioral interventions, improved diet, nutrient supplementation, better sleep, and increased physical activity have all been shown to have beneficial effects either alone or in combination with medication use.

What is a neurotransmitter and why are they important?

Neurotransmitters are known as chemical messengers in the body. They transmit information within the nervous system and enable the brain to perform a variety of functions.

When it comes to ADHD, there is often an imbalance of neurotransmitters which can be detected with specific testing done by qualified doctors. Functional medicine oftentimes aims to determine what these imbalances are and consequently balance them out in the treatment plan.

Modifying children’s physical and social environments by using rewards and non-punitive consequences can help manage ADHD. Some effective strategies include:

What we eat has a profound effect on our health. “Nutritional deficiencies from a ‘Western’ diet, food insecurities, artificial food additives and dyes, food sensitivities and allergies have all been implicated in ADHD.” (Esparham, A 2014) Oxidative stress (inflammation) is an underlying risk factor for ADHD. Since Western diets are typically high in omega-6 fatty acids, sodium, and sugar, all of which can induce inflammation, swapping out processed foods with more whole foods (especially plants) may help decrease ADHD symptoms.

Gluten-related disorders (Celiac Disease and non-celiac gluten sensitivity) may also be associated with ADHD. Exposure to gluten in these individuals can cause intestinal damage that can lead to chronic inflammatory immune dysregulation throughout the body. In some people, this chronic inflammation masquerades as behavioral and psychiatric disorders, such as ADHD.  Eliminating gluten can improve mood, focus and attention, as well as decrease disruptive behaviors

Adequate nutrient levels play a large role in optimizing neurotransmitters and brain activity. Below is a list of various nutrients that may affect ADHD:

It is also important to recognize the effect of sleep on the body. Healthy, deep/REM sleep is essential for the body to “reset” at night, both physically and mentally. This is the time for your neuroendocrine system to “catch up” with the day and prepare for the day ahead. Should there be a disruption in sleep cycles, there will be a consequential disruption in neuroendocrine function the next day. This could be as simple as feeling sluggish and having brain fog the next day, all the way to a child having a meltdown in school. It has been shown that treatment of sleep problems/disorders may improve ADHD symptoms. Ironically, some of the stimulant medications used to treat ADHD can exacerbate some sleep issues, so it’s important to take that into consideration when discussing a treatment plan.

Regular exercise  is important not only for overall health, but also for brain health. Ever heard of “runner’s high”? This is a release of neurotransmitters to the brain and body that help to create a positive mood/affect. It has been shown that 30-60 minutes of vigorous activity a day has a positive effect on ADHD, especially those with a hyperactive/impulsive type. Furthermore, studies have shown that physical activity specifically in the morning can have a positive effect on attention and behavior throughout the day.

Treating ADHD is an individual thing

It cannot be stressed enough that there are many ways to attempt treating ADHD, and there generally is not just “one way” to do so. Finding a qualified professional, asking the right questions, doing adequate testing and trying different solutions can absolutely yield positive results. While medication is an option, remember that it’s not the only option available.